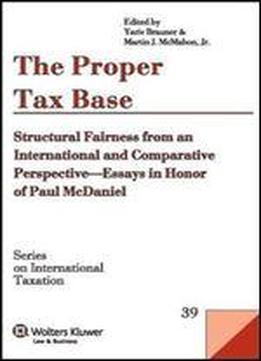 The Proper Tax Base: Structural Fairness From An International And Comparative Perspective - Essays In Honour Of Paul Mcdaniel
by Yariv Brauner / 2018 / English / PDF

Virtually all objections to taxation schemes spring from perceptions of unfairness. Is tax fairness possible? The question is certainly worth investigating in depth, and that is the purpose of this book. Today, as governments are busily making new tax rules in the wake of staggering budget deficits, is perhaps an appropriate time to pay heed to fairness so it can be incorporated as far as possible into tax reform. With twelve contributions from some of the world's most respected international tax experts--including the late Paul McDaniel, in whose honor these essays were assembled--this invaluable book focuses on tax expenditure analysis, the quest for a just income tax, and division and/or harmonization of the income tax base among jurisdictions. Among the areas of taxation ripe for reform from a fairness point of view the authors single out the following: tax expenditure budget construction tax expenditure reporting modern welfare economics as a driver of tax reform grantor trust rules the notion of ""horizontal equity"" the international tax norm of ""income source"" transfer pricing and jurisdictional application of VAT. Specific ongoing reforms in the United States, Australia, and other countries' as well a detailed analysis of the EU's proposed common consolidated corporate tax base (CCCTB) are also examined for fairness. As a timely, high-quality resource that effectively tackles an array of salient issues, this is a book that will be read and studied by tax practitioners, corporate tax experts, government tax policy makers, advisers and consultants on the reform and design of tax systems, and international organizations involved in standard setting related to tax administration, as well as academics and researchers.