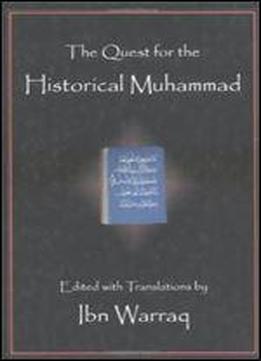 More than one hundred years ago Western scholars began to investigate the origins of Islam, using the highest standards of objective historical scholarship of the time. Their aim was to determine what could be known about Muhammad and the rise of early Islam quite apart from the pious and totally unobjective traditions preserved by the Muslim religious community. In some ways this research was inspired by a similar investigation of Christianity made famous by Albert Schweitzer's Quest of the Historical Jesus. Today although much has been learned about early Christianity, little comparable progress has been made in the field of Islamic Studies. Here objective historical research has long been severely handicapped both by the resistance of Muslim societies to Western analysis of their sacred traditions and by the apologetic approaches of many Western scholars, who have compromised their investigations for fear of offending Muslim sensibilities. It is in this context that Ibn Warraq presents this important anthology of the best studies of Muhammad and early Islam ranging from the very beginnings of Islamic Studies in the nineteenth century to contemporary research. In his selection and in an introductory essay, Warraq makes it clear that some very serious scholarly controversies lie at the heart of Islam. First, the Koran itself, the Muslim sacred scripture and the foundation of Islamic culture, is called into question as the basis for objective historical knowledge of Muhammad. Some scholars have also questioned the reliability of most of the other early Arabic documents that supposedly attest to events in the life of Muhammad and his followers. Was the Koran dictated by Muhammad at all? Was it actually compiled any earlier than a hundred years after the Prophet's death? How much of Muslim sacred tradition, in the light of objective historical analysis, must be dismissed as unreliable hearsay? Were the motives of the first Muslim conquerors during the Jihad truly religious in nature or largely mercenary? These disturbing questions, long suppressed throughout the history of Islamic scholarship, are here raised again in these erudite and thoroughly researched essays by noted scholars.