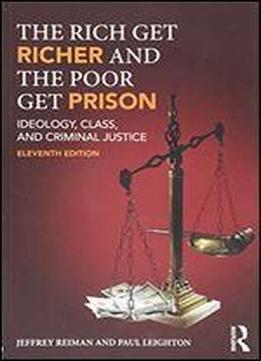 For nearly 40 years, this classic text has taken the issue of economic inequality seriously and asked: Why are our prisons filled with the poor? Why arent the tools of the criminal justice system being used to protect Americans from predatory business practices and to punish well-off people who cause widespread harm? The Rich Get Richer shows readers that much that goes on in the criminal justice system violates citizens sense of basic fairness. It presents extensive evidence from mainstream data that the criminal justice system does not function in the way it says it does nor in the way that readers believe it should. The authors develop a theoretical perspective from which readers might understand these failures and evaluate them morallyand they to do it in a short and relatively inexpensive text written in plain language. New to this edition: Presents recent data comparing the harms due to criminal activity with the harms of dangerousbut not criminalcorporate actions Presents new data on recent crime rate declines, which are paired with data on how public safety is not prioritized by the U.S. government Updates statistics on crime, victimization, wealth and discrimination, plus coverage of the increasing role of criminal justice fines and fees in generating revenue for government Updates on the costs to society of white-collar crime Updates and deepened analysis of why fundamental reforms are not undertaken Streamlined and condensed prosefor greater clarity