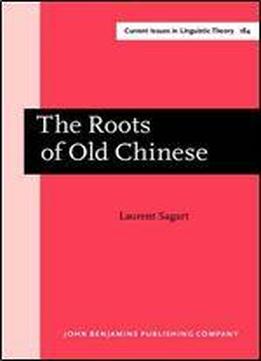 The phonology, morphology and lexicon of late Zhou Chinese are examined in this volume. It is argued that a proper understanding of Old Chinese morphology is essential in correctly reconstructing the phonology. Based on evidence from word-families, modern dialects and related words in neighboring languages, Old Chinese words are claimed to consist of a monosyllabic root, to which a variety of derivational affixes attached. This made Old Chinese typologically more like modern languages such as Khmer, Gyarong or Atayal, than like Middle and modern Chinese, where only faint traces of the old morphology remain. In the first part of the book, the author proposes improvements to Baxter's system of reconstruction, regarding complex initials and rhymes, and then reviews in great detail the Old Chinese affixal morphology. New proposals on phonology and morphology are integrated into a coherent reconstruction system. The second part of the book consists of etymological studies of important lexical items in Old Chinese. The author demonstrates in particular the role of proportional analogy in the formation of the system of personal pronouns. Special attention is paid to contact phenomena between Chinese and neighboring languages, and unlike most literature on Sino-Tibetan the author identifies numerous Chinese loanwords into Tibeto-Burman. The book, which contains a lengthy list of reconstructions, an index of characters and a general index, is intended for linguists and cultural historians, as well as advanced students.