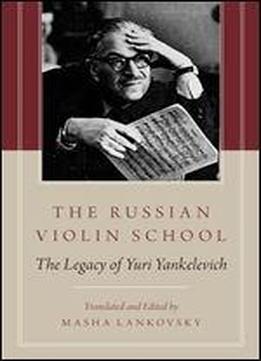 The Russian Violin School: The Legacy Of Yuri Yankelevich
by Eiiu I Eiiankelevich / 2016 / English / PDF

The Russian school of violin playing produced many of the twentieth century's leading violinists - from the famed disciples of Leopold Auer such as Jascha Heifetz, Nathan Milstein, and Mischa Elman to masters of the Soviet years such as David Oistrakh and Leonid Kogan. Though descendants of this school of playing are found today in every major orchestra and university, little is known about the pedagogical traditions of the Russian, and later Soviet, violin school. Following the revolution of 1917, the center of Russian violin playing and teaching shifted from St. Petersburg to Moscow, where violinists such as Lev Tseitlin, Konstantin Mostras, and Abraham Yampolsky established an influential pedagogical tradition. Founded on principles of scientific inquiry and physiology, this tradition became known as the Soviet Violin School, a component of the larger Russian Violin School. Yuri Yankelevich (1909 - 1973), a student and assistant of Abraham Yampolsky, was greatly influenced by the teachers of the Soviet School and in turn he became one of the most important pedagogues of his generation. Yankelevich taught at the Moscow Conservatory from 1936 to 1973 and produced a remarkable array of superb violinists, including forty prizewinners in international competitions. Extremely interested in the methodology of violin playing and teaching, Yankelevich contributed significant texts to the pedagogical literature. Despite its importance, Yankelevich's scholarly work has been little known outside of Russia. This book includes two original texts by Yankelevich: his essay on positioning the hands and arms and his extensive research into every detail of shifting positions. Additional essays and commentaries by those close to him examine further details of his pedagogy, including tone production, intonation, vibrato, fingerings and bowings, and his general approach to methodology and selecting repertoire. An invaluable resource for any professional violinist, Yankelevich's work reveals an extremely sophisticated approach to understanding the interconnectivity of all components in playing the violin and is complete with detailed practical suggestions and broad historical context.