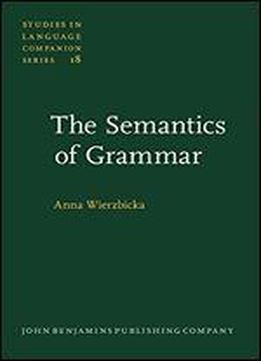 The Semantics Of Grammar
by Anna Wierzbicka / 1988 / English / PDF

"The semantics of grammar" presents a radically semantic approach to syntax and morphology. It offers a methodology which makes it possible to demonstrate, on an empirical basis, that syntax is neither "autonomous" nor "arbitrary," but that it follows from "semantics." It is shown that every grammatical construction encodes a certain semantic structure, which can be revealed and rigorously stated, so that the meanings encoded in grammar can be compared in a precise and illuminating way, within one language and across language boundaries. The author develops a semantic metalanguage based on lexical universals or near-universals (and, ultimately, on a system of universal semantic primitives), and shows that the same semantic metalanguage can be used for explicating lexical, grammatical and pragmatic aspects of language and thus offers a method for an integrated linguistic description based on semantic foundations. Analyzing data from a number of different languages (including English, Russian and Japanese) the author explores the notion of ethnosyntax and, via semantics, links syntax and morphology with culture. She attemps to demonstrate that the use of a semantic metalanguage based on lexical universals makes it possible to rephrase the Humboldt-Sapir-Whorf hypothesis in such a way that it can be tested and treated as a program for empirical research.