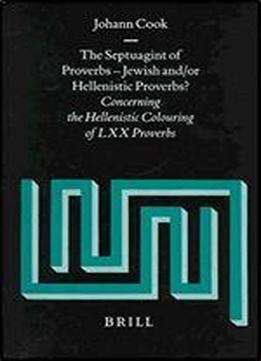 This monograph deals with an important but unexplored document of Hellenistic Judaism. The question of "Hellenistic influence" is addressed on the basis of an analysis of a representative number of chapters of Septuagint Proverbs (1, 2, 6, 8, 9, 24, 29, 30 and 31). Scholars have argued that this book was influenced extensively by Greek philosophy. The author follows a contextual cultural method. The Greek text is analysed on four levels: the semantic, syntactical, stylistic (which represents the translation technique of the translator), and finally the "theological" level. This study represents the first exhaustive analysis of the theme. The conclusion is that the impact of Stoicism on this Greek version has been overestimated in the past. Novel views are also formulated concerning the role of the law in LXX Proverbs, its historical setting and its text-critical value.