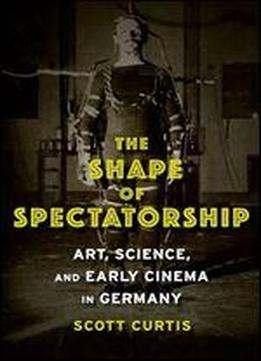 The Shape Of Spectatorship: Art, Science, And Early Cinema In Germany
by Scott Curtis / 2015 / English / PDF

In this exceptionally wide-ranging study, Scott Curtis draws our eye to the role of scientific, medical, educational, and aesthetic observation in shaping modern conceptions of spectatorship. Focusing on the nontheatrical use of motion picture technology in Germany between the 1890s and World War I, he follows specialists across disciplines as they debated and appropriated film for their own ends, negotiating the fascinating, at times fraught relationship between technology, discipline, and expert vision. As researchers, teachers, and intellectuals adapted film and its technology to their viewing practices, often emphasizing the formal connection between material and discipline, they produced new ideas of mass spectatorship that continue to affect the way we make and experience film. By staging a collision between the moving image and scientific or medical observation, visual instruction, and aesthetic contemplation, Curtis showcases both the full extent of early cinema's revolutionary impact on society and culture and the challenges the new medium placed on ways of seeing and learning.