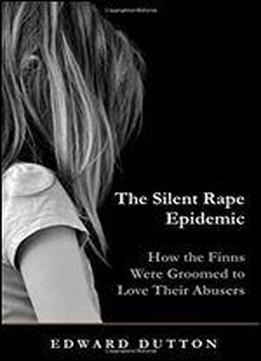 The Silent Rape Epidemic: How The Finns Were Groomed To Love Their Abusers
by Edward Dutton / 2019 / English / PDF

In 2003, the northern Finnish city of Oulu was what foreigners imagined such a city would be: calm, quiet and very Finnish. By December 2018, the whole country was convulsed by Oulus Muslim Child Grooming Scandal. A gang of Arab refugees were up in court for the sexual assault and rape of under age Oulu girls and it transpired that Finlands politicians and mainstream media had done everything possible guided by the divine light of Multiculturalism to cover it up. How could a country like Finland stereotyped as nationalistic and culturally conservative have embraced the Multicultural suicide cult so rapidly? In The Silent Rape Epidemic, Dutton argues that the explanation lies in Finns evolutionary past. Adapted to extreme cold and predictability, they are fiercely intelligent, extraordinarily cooperative, highly rule following, silent, and socially anxious. This makes them naively trusting, conformist and prone to imitating others. Perfectly adapted to their environment, these traits are combined with a miniscule gene pool, meaning very few intelligence or personality outliers who might dare to challenge the Spirit of the Age. The intense Darwinian selection to which theyve been subjected, and their late industrialization, has delayed the rise of nihilism, which arises when nations industrialize and selection pressures are weakened. But the nature of Finnishness means that Multiculturalism has now overwhelmed Finland with astonishing speed. However, all is not lost. Dutton finds that if the Finns truly want to save the Suomi of sauna and Sibelius, then they are, ironically, uniquely well-adapted to reverse their countrys destruction.