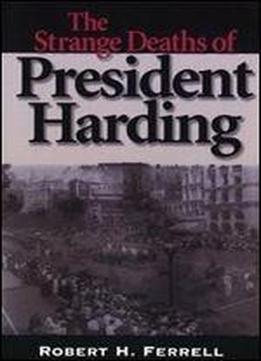 Available for the first time in paperback, The Strange Deaths of President Harding challenges readers to reexamine Warren G. Harding's rightful place in American history. For nearly half a century, the twenty-ninth president of the United States has consistently finished last in polls ranking the presidents. After Harding's untimely death in 1923, a variety of attacks and unsubstantiated claims left the public with a tainted impression of him. In this meticulously researched scrutiny of the mystery surrounding Harding's death, Robert H. Ferrell, distinguished presidential historian, examines the claims against this unpopular president and uses new material to counter those accusations.At the time of Harding's death there was talk of his similarity, personally if not politically, to Abraham Lincoln. Secretary of State Charles Evans Hughes described Harding as one of nature's noblemen, truehearted and generous. But soon after Harding's death, his reputation began to spiral downward. Rumors circulated of the president's death by poison, either by his own hand or by that of his wife allegations of an illegitimate daughter were made and question were raised concerning the extent of Harding's knowledge of the Teapot Dome scandal and of irregularities in the Veterans' Bureau, as well as his tolerance of a corrupt attorney general who was an Ohio political fixer. Journalists and historians of the time added to his tarnished reputation by using sources that were easily available but not factually accurate.In The Strange Deaths of President Harding, Ferrell lays out the facts behind these allegations for the reader to ponder. Making the most of the recently opened papers of assistant White House physician Dr. Joel T. Boone, Ferrell shows that for years Harding suffered from high blood pressure, was under a great deal of stress, and overexerted himself it was a heart attack that caused his death, not poison. There was no proof of an illegitimate child. And Harding did not know much about the scandals intensifying in the White House at the time of his death. In fact, these events were not as scandalous as they have since been made to seem.In this meticulously researched and eminently readable scrutiny of the mystery surrounding Harding's death, as well as the deathblows dealt his reputation by journalists, Ferrell asks for a reexamination of Harding's place in American history.