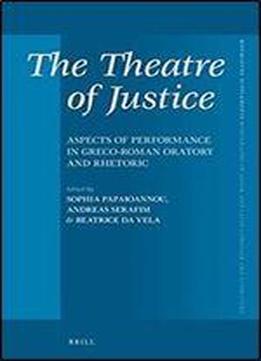 The Theatre Of Justice: Aspects Of Performance In Greco-roman Oratory And Rhetoric
by Sophia Papaioannou / 2017 / English / PDF

The Theatre of Justice contains 17 chapters that offer a holistic view of performance in Greek and Roman oratorical and political contexts. This holistic view consists of the examination of two areas of techniques. The first one relates to the delivery of speeches and texts: gesticulation, facial expressions and vocal communication. The second area includes a wide diversity of techniques that aim at forging a rapport between the speaker and the audience, such as emotions, language and style, vivid imagery and the depiction of characters. In this way the volume develops a better understanding of the objectives of public speaking, the mechanisms of persuasion, and the extent to which performance determined the outcome of judicial and political contests.