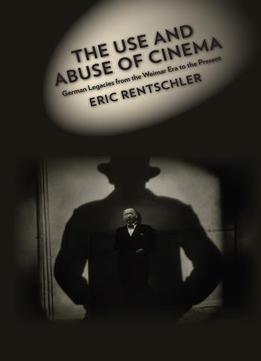 The Use And Abuse Of Cinema: German Legacies From The Weimar Era To The Present
by Eric Rentschler / 2015 / English / EPUB

Eric Rentschler's new book, The Use and Abuse of Cinema, takes readers on a series of enthralling excursions through the fraught history of German cinema, from the Weimar and Nazi eras to the postwar and postwall epochs and into the new millennium. These journeys afford rich panoramas and nuanced close-ups from a nation's production of fantasies and spectacles, traversing the different ways in which the film medium has figured in Germany, both as a site of creative and critical enterprise and as a locus of destructive and regressive endeavor. Each of the chapters provides a stirring minidrama; the cast includes prominent critics such as Siegfried Kracauer and Rudolf Arnheim; postwar directors like Wolfgang Staudte, Rainer Werner Fassbinder, Wim Wenders, and Alexander Kluge; representatives of the so-called Berlin School; and exponents of mountain epics, early sound musicals, rubble films, and recent heritage features. A film history that is both original and unconventional, Rentschler's colorful tapestry weaves together figures, motifs, and stories in exciting, unexpected, and even novelistic ways.