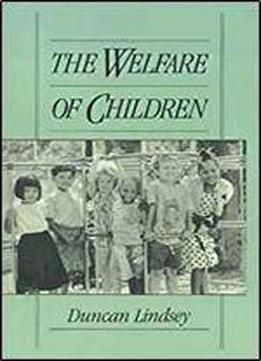 The Welfare Of Children
by Duncan Lindsey / 1994 / English / PDF

Today the United States has more children living in poverty than any other industrialized nation. Some 2.1 million children are left undersupervised before and after school due to inadequate child care available to working parents. Furthermore, the U.S., a country which once pioneered strategies to prevent child abuse and which now spends more money fighting child abuse than any other industrialized country, has the world's highest rate of child abuse. Against this background, Duncan Lindsey, a leading authority on child welfare, takes a critical look at the current child welfare system. He traces the transformation of child welfare into child protective services. The current focus on abuse has produced a system that is designed to protect children from physical and sexual abuse and therefore functions as a last resort for only the worst and most dramatic cases in child welfare. In a close analysis of the process of investigating and handling child abuse, Lindsey finds that there is no evidence that the transformation to protective services has reduced child abuse fatalities or provided a safer environment for children. He makes a compelling argument for the criminal justice system to assume responsibility for the problem of child abuse in order that the child welfare system can address the well- being of a much larger number of children. The Welfare of Children is a compassionate blueprint for comprehensive reform of the child welfare system to one that administers to the economic security of the large number of disadvantaged and impoverished children. Concrete policy proposals such as a Child's Future Security Account, similar to the Social Security Program for older citizens, will spark serious debate on a major public policy issue facing our society.