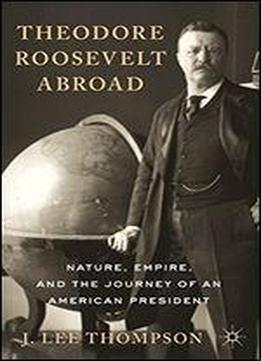 In a life full of momentous episodes, Theodore Roosevelts fifteen-month post-presidential odyssey to Africa and Europe has never been given its due place. In 1909 and 1910, fresh from the presidency, Rooosvelt embarked on a grand expedition that fulfilled a long-held dream for the hunter-naturalist. Moving from Egypt to British East Africa to the Belgian Congo, Roosevelt hunted elephants and rhinos, parlayed with mercenaries and tribal kings, and observed the changes wrought by European colonialism. Along with his big game rifles, Roosevelt also brought his bully pulpit and accompanying ideals, lecturing diplomats and politicians on both continents on the exertions required to maintain the burden of empire. In this engaging narrative, J. Lee Thompson traces the exhilarating adventures Roosevelt undertook as well as periods of doubt and disillusionment. Even as TR realized one dream of nature on safari, he came to believe another, more vital to his heart and legacy, was being undermined at home by President William Howard Taft. Having initially assumed that the new president would continue his predecessors cherished conservation policies, Roosevelt came to realize that Taft, left alone in the political jungles of Washington, was directly undermining his legacy. This led to an acrimonious split between the two old friends, Roosevelts explosive return to the American political stage, and ultimately the election of Woodrow Wilson. A tale of daring adventure, international celebrity, a friendship lost, and a political legacy transformed, Theodore Roosevelt Abroad is the first full account of a critical episode in the life of an American icon.