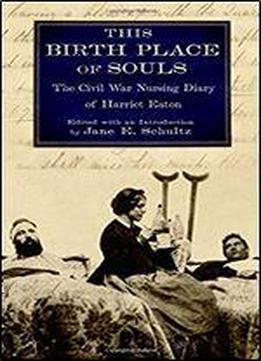 After the battle of Antietam in 1862, Harriet Eaton traveled to Virginia from her home in Portland, Maine, to care for soldiers in the Army of the Potomac. Portland's Free Street Baptist Church, with liberal ties to abolition, established the Maine Camp Hospital Association and made the widowed Eaton its relief agent in the field. One of many Christians who believed that patriotic activism could redeem the nation, Eaton quickly learned that war was no respecter of religious principles. Doing the work of nurse and provisioner, Eaton tended wounded men and those with smallpox and diphtheria during two tours of duty. Eaton struggled with the disruptions of transience, scarcely sleeping in the same place twice, but found the politics of daily toil even more challenging. Conflict between Eaton and coworker Isabella Fogg erupted almost immediately over issues of propriety. Though Eaton praised some of the surgeons with whom she worked, she labeled others charlatans whose neglect had deadly implications for the rank and file. If she saw villainy, she also saw opportunities to convert soldiers and developed an intense spiritual connection with a private, which appears to have led to a postwar liaison. Published here for the first time, the uncensored nursing diary is a rarity among medical accounts of the war, showing Eaton to be an astute observer of human nature and not as straight-laced as we might have thought. This edition includes an extensive introduction by the editor, transcriptions of relevant letters and newspaper articles, and a comprehensive biographical dictionary of the people mentioned in the diary.