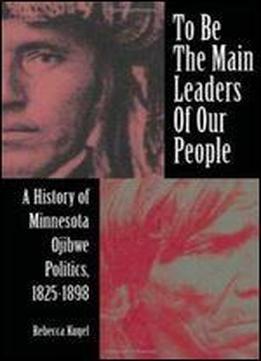 In the spring of 1868, people from several Ojibwe villages located along the upper Mississippi River were relocated to a new reservation at White Earth, more than 100 miles to the west. In many public declarations that accompanied their forced migration, these people appeared to embrace the move, as well as their conversion to Christianity and the new agrarian lifestyle imposed on them. Beneath this surface piety and apparent acceptance of change, however, lay deep and bitter political divisions that were to define fundamental struggles that shaped Ojibwe society for several generations. In order to reveal the nature and extent of this struggle for legitimacy and authority, To Be The Main Leaders of Our People reconstructs the political and social history of these Minnesota Ojibwe communities between the years 1825 and 1898. Ojibwe political concerns, the thoughts and actions of Ojibwe political leaders, and the operation of the Ojibwe political system define the work's focus. Kugel examines this particular period of time because of its significance to contemporary Ojibwe history. The year 1825, for instance, marked the beginning of a formal alliance with the United States 1898 represented not an end, but a striking point of continuity, defying the easy categorizations of Native peoples made by non-Indians, especially in the closing years of the nineteenth century. In this volume, the Ojibwe "speak for themselves," as their words were recorded by government officials, Christian missionaries, fur traders, soldiers, lumbermen, homesteaders, and journalists. While they were nearly always recorded in English translation, Ojibwe thoughts, perceptions, concerns, and even humor, clearly emerge. To Be The Main Leaders of Our People expands the parameters of how oral traditions can be used in historical writing and sheds new light on a complex, but critical, series of events in ongoing relations between Native and non-Native people.