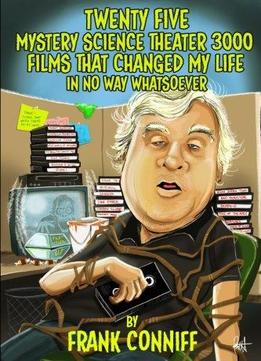 In 1990, Frank Conniff joined the staff of Mystery Science Theater 3000. First he was hired as a writer, then he was called upon to play TV’s Frank, the bumbling yet lovable Mad Scientist henchman in Deep 13. And then he was given the sacred duty of finding the films that would be riffed on the show. Thus, because of his actions, the world now knows of Manos: The Hands of Fate, Monster A-Go-Go, The Brain That Wouldn’t Die, Teenagers From Outer Space, and many other cheesy movies that the world would just as soon not know about. In these essays, TV’s Frank focuses on twenty-five of the Mystery Science Theater 3000 films he found and riffed with his fellow MST3K writers and cast mates. It tells the story of how a comedian who was lucky enough to work on beloved Peabody Award winning TV show was transformed into a comedian who was lucky enough to work on a beloved Peabody Award winning TV show. It’s a story that will stay with you for the rest of your life, if you happen to die just as you finish reading the book.