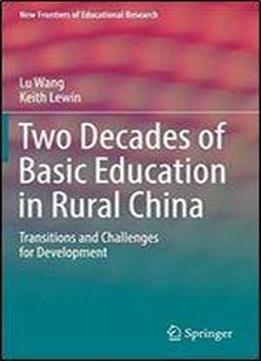 This book examines how educational change has progressed in three contrasting areas spread across China since 1990, exploring key issues concerning rural education in poor, rich and minority areas. Of the three areas covered in this book, the first is a rich one near Beijing the second is in the northwest in Shanxi on the Loess plateau and the third is in Sichuan on the high plateau leading to Tibet. Central issues include the impact of large-scale demographic change and migration, with increasing numbers of left-behind children in sending areas, and large increases in the numbers of inbound migrants in receiving areas dramatic increases in the boarding of children in rural areas as a result of rural school merge changing patterns of teacher deployment recentralization of responsibilities for school financing and growing concerns regarding horizontal and vertical inequalities in both access and participation.