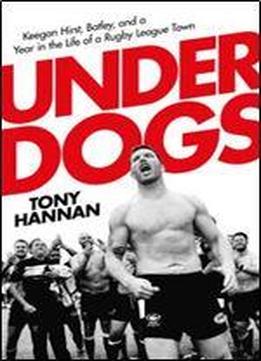 Underdogs: Keegan Hirst, Batley And A Year In The Life Of A Rugby League Town
by TONY HANNAN / 2017 / English / EPUB

One of the founder members in 1895 of what became the Rugby League, Batley was once a thriving centre of commerce, one of the bustling mill towns in the Heavy Woollen District of West Yorkshire. More than 120 years on, times have changed, even if the town's Victorian buildings remain, but one constant is the importance of the club as the centre of the community. And in 2016, the Batley Bulldogs brought more than their fair share of pride to the town. They were Underdogs, but gave their professional Super League rivals a run for their money in a season that surpassed all expectations. Given unprecedented access to the team - players, staff and fans - Tony Hannan charts a fascinating year in the life of a lower-league club, of labourers spilling blood and guts on to Batley's notorious sloping pitch before getting bruised bodies up for work on a Monday morning, of hand-to-mouth existence at the unglamorous and gritty end of British sport. And at their centre is the Bulldogs captain Keegan Hirst, the first rugby league player to come out as gay, and inspirational coach John Kear, just two men in the most colourful cast of characters. It was also a year when the town was plunged into tragedy by the brutal murder of local MP Jo Cox, a great supporter of the club. Underdogs is more than just a book about Batley though. It is the story of northern working-class culture, past and present, and a report from the front-line of a society struggling to find its identity in a changing world.