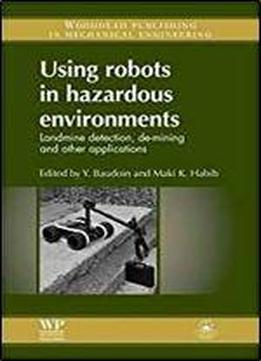 There have been major recent advances in robotic systems that can replace humans in undertaking hazardous activities in demanding or dangerous environments. Published in association with the CLAWAR (Climbing and Walking Robots and Associated Technologies Association) (www.clawar.org), this important book reviews the development of robotic systems for de-mining and other risky activities such as fire-fighting. Part one provides an overview of the use of robots for humanitarian de-mining work. Part two discusses the development of sensors for mine detection whilst Part thee reviews developments in both teleoperated and autonomous robots. Building on the latter, Part four concentrates on robot autonomous navigation. The final part of the book reviews research on multi-agent-systems (MAS) and the multi-robotics-systems (MRS), promising tools that take into account modular design of mobile robots and the use of several robots in multi-task missions. With its distinguished editors and international team of contributors, Using robots in hazardous environments: landmine detection, de-mining and other applications is a standard reference for all those researching the use of robots in hazardous environments as well as government and other agencies wishing to use robots for dangerous tasks such as landmine detection and disposal. Reviews the development of robotic systems for de-mining and other risky activities Discusses the development and applications of sensors for mine detection using different robotic systems Examines research on multi-agent-systems and multi-robotics systems