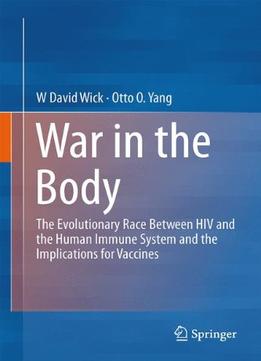 War In The Body: The Evolutionary Arms Race Between Hiv And The Human Immune System And The Implications For Vaccines
by W. David Wick / 2013 / English / PDF

In the relatively few decades since the introduction of HIV into the human population, variants of the virus have diverged to such an extent that, were the discussion about something other than viruses, said variants could easily be classified as different species. This book will consider these evolutionary variations, as well as the different and, at times, opposing theories attempting to explain them. It will compare and contrast the ways in which the immune system and drugs affect the virus's evolution, and the implications of these for vaccine development. The issue will be explored and explained through "ecological genetics," which postulates that all living organisms have, besides rivals, enemies. This is divergent from the more traditional school of "population genetics," which emphasizes that evolution occurs among rival species (or variants thereof) that compete for niches or resources in a fixed, unreactive environment. Both models will be formulated using mathematical models, which will be included in the book. Finally, it will consider the possibilities for designing a vaccine that blocks HIV from escaping the immune system.