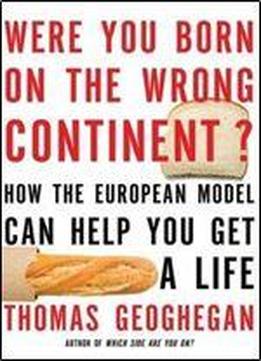 Were You Born On The Wrong Continent?: How The European Model Can Help You Get A Life
by Thomas Geoghegan / 2017 / English / EPUB

The acclaimed labor lawyer and prizewinning author Thomas Geoghegan asks: where are we better offAmerica or Europe? In an idiosyncratic, entertaining travelogue that plays on public policy, Geoghegan asks what our lives would be like if we lived them as Europeans. Sneaking out of his workaholic American life, he takes five trips where he tries to understand so-called European socialism firsthand. Though he first tries France (which has become a rhetorical stand-in for the continent as a whole in many Americans' minds), he eventually ventures into Germany to see what some call the "boring" Europe. There he finds the true "other"an economic model with more bottom-up worker control than that of any other country in the worldand argues that, while we have to take Germanys problems seriously, we also have to look seriously at how much it has achieved. Social democracy may let us live nicer lives it also may be the only way to be globally competitive. This wry, timely book helps us understand why the European model, contrary to popular neoliberal wisdom, may thrive well into the twenty-first century without compromising its citizens' ease of livingand be the best example for the United States to follow.