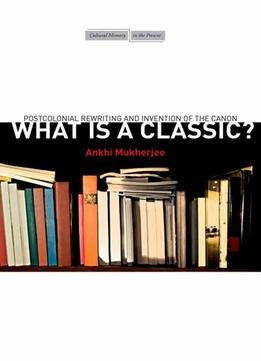 What Is A Classic?: Postcolonial Rewriting And Invention Of The Canon
by Ankhi Mukherjee / 2013 / English / PDF

What Is a Classic? revisits the famous question posed by critics from Sainte-Beuve and T. S. Eliot to J. M. Coetzee to ask how classics emanate from postcolonial histories and societies. Exploring definitive trends in twentieth- and twenty-first century English and Anglophone literature, Ankhi Mukherjee demonstrates the relevance of the question of the classic for the global politics of identifying and perpetuating so-called core texts. Emergent canons are scrutinized in the context of the wider cultural phenomena of book prizes, the translation and distribution of world literatures, and multimedia adaptations of world classics. Throughout, Mukherjee attunes traditional literary critical concerns to the value contestations mobilizing postcolonial and world literature. The breadth of debates and topics she addresses, as well as the book's ambitious historical schema, which includes South Asia, Africa, the Middle East, the West Indies, Australia, New Zealand, Europe, and North America, set this study apart from related titles on the bookshelf today.