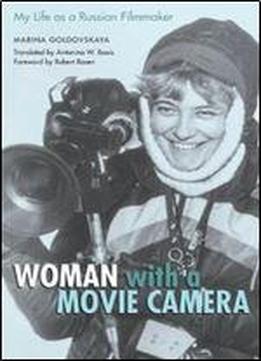 Woman With A Movie Camera: My Life As A Russian Filmmaker (constructs)
by Marina Goldovskaya / 2006 / English / PDF

Marina Goldovskaya is one of Russia's best-known documentary filmmakers. The first woman in Russia (and possibly the world) to combine being a director, writer, cinematographer, and producer, Goldovskaya has made over thirty documentary films and more than one hundred programs for Russian, European, Japanese, and American television. Her work, which includes the award-winning films The House on Arbat Street, The Shattered Mirror, and Solovky Power, has garnered international acclaim and won virtually every prize given for documentary filmmaking. In Woman with a Movie Camera, Goldovskaya turns her lens on her own life and work, telling an adventurous, occasionally harrowing story of growing up in the Stalinist era and subsequently documenting Russian society from the 1960s, through the Thaw and Perestroika, to post-Soviet Russia. She recalls her childhood in a Moscow apartment building that housed famous filmmakers, being one of only three women students at the State Film School, and working as an assistant cameraperson on the first film of Andrei Tarkovsky, Russia's most celebrated director. Reviewing her professional filmmaking career, which began in the 1960s, Goldovskaya reveals her passion for creating films that presented a truthful picture of Soviet life, as well as the challenges of working within (and sometimes subverting) the bureaucracies that controlled Russian film and television production and distribution. Along the way, she describes a host of notable figures in Russian film, theater, art, and politics, as well as the technological evolution of filmmaking from film to video to digital media. A compelling portrait of a woman who broke gender and political barriers, as well as the eventful four decades of Russian history she has documented, Woman with a Movie Camera will be fascinating reading for a wide audience.