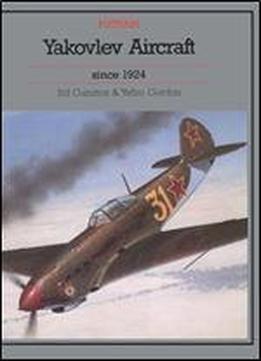 Alexandr S. Yakovlev was one of the most versatile aircraft designers of his age, but he had the misfortune to work in the USSR which made him almost unknown to the outside world. In 1926-27 he built his first aeroplane and from then on he designed structures which were, time and again, ahead of their time. In 1934, he was offered a derelict bed factory which he shortly transformed into a major design and manufacturing plant. From those premises came, to mention just some, a spate of sporting and training aircraft which gained many world-class records: the chief family of Soviet single-seat fighters of World War II, the Yak-1, -3, -7 and -9 of which 36,769 were built. He built the first jet to fly in the USSR and the first Soviet transport helicopters. Later came the principal Soviet radar-equipped interceptors, from which stemmed many other types of tactical twin-jet, including the Soviet counterpart to the U-2. Yakovlev died in 1989, and today his design bureau, still on the site of the old bed factory, is the giant Yak Aircraft Corporation. It produces the most important Russian twin-jet airliner, a diverse group of general-aviation aircraft, an advanced jet trainer and light-attack aircraft and, in conjunction with the Museum of Flying in California, replicas of the Yak-3 wartime fighter. This volume is a detailed analysis of all these and many other aircraft.