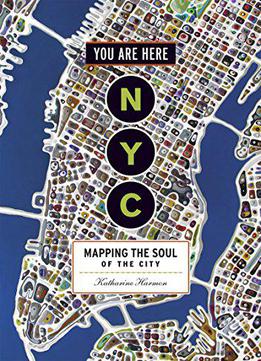 You Are Here: Nyc: Mapping The Soul Of The City
by Katharine Harmon / 2016 / English / PDF

Maps are magical. Every graphic, like every story, has a point of view, and New York is rife with mapmaking possibilities, thick with mythology, and glutted with history. You Are Here: NYC assembles some two hundred maps charting every inch and facet of the five boroughs, depicting New Yorks of past and present, and a city that never was. "A Nightclub Map of Harlem" traces a boozy night from the Radium and the Cotton Club to the Savoy and then the Lafayette; "Wonders of New York" pinpoints three hundred sites of interest, including the alleged location of Captain Kidd's buried treasure; the Ghostbusters subway map plots the route from Astral Projections Place to Stay Puft Street; and a rejected proposal of ornate topiaries illustrates a Central Park that might have been. This sequel to the best-selling You Are Here includes original essays by Bob Mankoff, Maria Popova, Sarah Boxer, and Rebecca Cooper, among others.