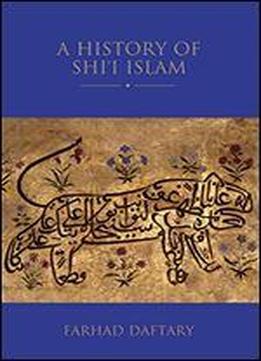 I.B.Tauris in association with the Institute of Ismaili Studies Shi'i Muslims have played a crucial role, proportionally greater than their relative size, in furthering the civilizational achievements of Islam. Indeed, the Shi'i scholars and literati of various branches and regions, including scientists, philosophers, theologians, jurists and poets, have made seminal contributions to Islamic thought and culture. There have also been numerous Shi'i dynasties, families or individual rulers who patronized scholars, poets and artists as well as various institutions of learning in Islam. In spite of its significance, however, Shi'i Islam has received little scholarly attention in the West, and when it has been discussed, whether in general or in terms of some of its subdivisions, it has normally been treated marginally as a 'sect' or a 'heterodoxy'. The present book draws on the scattered findings of modern scholarship in the field, attempting to explain the formative era of Shi'i Islam, when a multitude of Muslim groups and schools of thought were elaborating their doctrinal positions. Subsequent chapters are devoted to the history of the Ithna'asharis, or Twelvers, the Ismailis, the Zaydis and the Nusayris (now more commonly known in Syria as the Alawis), the four communities that account for almost the entirety of the Shi'i Muslim population of the world. The result is a comprehensive survey of Shi'i Islam that will serve as an accessible work of reference for academics in both Islamic and Middle Eastern studies, as well as the broader field of the History of Religions, and also more general, non-specialist readers.