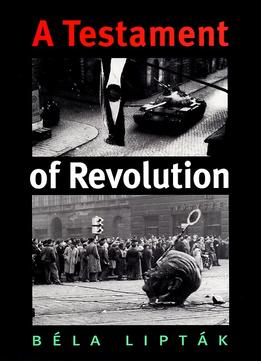 Terse, staccato, like a dispatch from the front, Bela Liptak's "A Testament of Revolution" gives readers a vivid, firsthand look at the brief, doomed struggle of Hungarian freedom fighters against Russian oppressors. Written in 1956 in an Austrian refugee camp, where the author had fled to escape reprisals for his role in the rebellion, Liptak's memoir compellingly sketches the conflict between university students, factory workers, and Hungarian nationalists on the one side and the hated Hungarian secret police and Russian army troops on the other. In a memoir that is both history and a saga of his coming of age, Liptak relates his transformation from carefree university student to impromptu revolutionary leader. His story unfolds with unsparing honesty as he makes the reader privy to his conflicts, faults, and failures of judgment and courage, laying bare his struggles with the enemy and with himself.