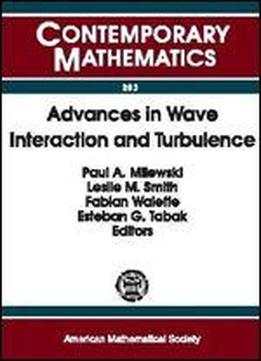 We often think of our natural environment as being composed of very many interacting particles, undergoing individual chaotic motions, of which only very coarse averages are perceptible at scales natural to us. However, we could as well think of the world as being made out of individual waves. This is so not just because the distinction between waves and particles becomes rather blurred at the atomic level, but also because even phenomena at much larger scales are better described in terms of waves rather than of particles. It is rare in both fluids and solids to observe energy being carried from one region of space to another by a given set of material particles much more often, this transfer occurs through chains of particles, neither of them moving much, but each communicating with the next, and hence creating these immaterial objects we call waves.Waves occur at many spatial and temporal scales. Many of these waves have small enough amplitude that they can be approximately described by linear theory. However, the joint effect of large sets of waves is governed by nonlinear interactions which are responsible for huge cascades of energy among very disparate scales. Understanding these energy transfers is crucial in order to determine the response of large systems, such as the atmosphere and the ocean, to external forcings and dissipation mechanisms which act on scales decades apart. The field of wave turbulence attempts to understand the average behavior of large ensembles of waves, subjected to forcing and dissipation at opposite ends of their spectrum. It does so by studying individual mechanisms for energy transfer, such as resonant triads and quartets, and attempting to draw from them effects that should not survive averaging.This book presents the proceedings of the AMS-IMS-SIAM Joint Summer Research Conference on Dispersive Wave Turbulence held at Mt. Holyoke College (MA). It drew together a group of researchers from many corners of the world, in the context of a perceived renaissance of the field, driven by heated debate about the fundamental mechanism of energy transfer among large sets of waves, as well as by novel applications-and old ones revisited-to the understanding of the natural world. These proceedings reflect the spirit that permeated the conference, that of friendly scientific disagreement and genuine wonder at the rich phenomenology of waves.