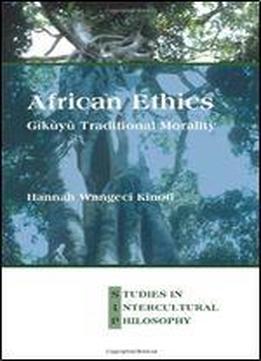 African Ethics: Gky Traditional Morality by Hannah Kinoti was prompted by the author's concern about the decline of moral standards among the Gky in modern Kenya. Western education and increased interaction with other cultures had made the society more complex and sophisticated. At the same time, social evils like corruption, robbery, prostitution, broken homes and sexual promiscuity were on the increase. "While this is happening," says the author, "African culture is often referred to in the past tense as if it is no longer relevant." She wished to discover what were the virtues that, prior to the introduction of western civilization, held society together and formed the basis of its morality. She decided to examine some of the key virtues (honesty, generosity, justice, courage and temperance) that were highly valued in traditional Gky culture. She then compared the understanding and practice of these virtues by three groups: old people (who had had first-hand experience of traditional life), middle-aged people and young people. The results of this study should appeal to researchers and teachers of African traditions, culture, religion and ethics. Equally, students of comparative ethics should find this a valuable source of information on traditional ways of maintaining behaviour that made for harmony in society. Young Africans wishing to get a deeper understanding of their roots should also find this work of great interest.