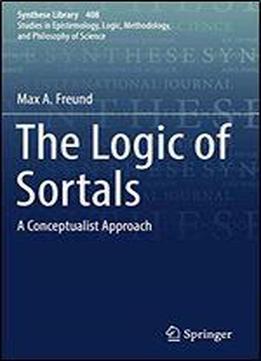 The Logic Of Sortals: A Conceptualist Approach
by Max A. Freund / 2019 / English / PDF

Sortal concepts are at the center of certain logical discussions and have played a significant role in solutions to particular problems in philosophy. Apart from logic and philosophy, the study of sortal concepts has found its place in specific fields of psychology, such as the theory of infant cognitive development and the theory of human perception. In this monograph, different formal logics for sortal concepts and sortal-related logical notions (such as sortal identity and first-order sortal quantification) are characterized. Most of these logics are intensional in nature and possess, in addition, a bidimensional character. That is, they simultaneously represent two different logical dimensions. In most cases, the dimensions are those of time and natural necessity, and, in other cases, those of time and epistemic necessity. Another feature of the logics in question concerns second-order quantification over sortal concepts, a logical notion that is also represented in the logics. Some of the logics adopt a constant domain interpretation, others a varying domain interpretation of such quantification. Two of the above bidimensional logics are philosophically grounded on predication sortalism, that is, on the philosophical view that predication necessarily requires sortal concepts. Another bidimensional logic constitutes a logic for complex sortal predicates. These three sorts of logics are among the important novelties of this work since logics with similar features have not been developed up to now, and they might be instrumental for the solution of philosophically significant problems regarding sortal predicates. The book assumes a modern variant of conceptualism as a philosophical background. For this reason, the approach to sortal predicates is in terms of sortal concepts. Concepts, in general, are here understood as intersubjective realizable cognitive capacities. The proper features of sortal concepts are determined by an analysis of the main features of sortal predicates. Posterior to this analysis, the sortal-related logical notions represented in the above logics are discussed. There is also a discussion on the extent to which the set-theoretic formal semantic systems of the book capture different aspects of the conceptualist approach to sortals. These different semantic frameworks are also related to realist and nominalist approaches to sortal predicates, and possible modifications to them are considered that might represent those alternative approaches.