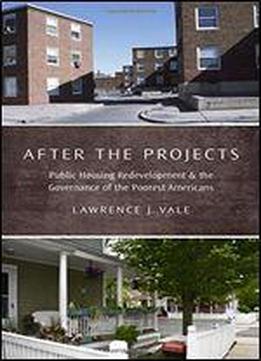 After The Projects: Public Housing Redevelopment And The Governance Of The Poorest Americans
by Lawrence J. Vale / 2018 / English / EPUB

America is in the midst of a rental housing affordability crisis. More than a quarter of those that rent their homes spend more than half of their income for housing, even as city leaders across the United States have been busily dismantling the nation's urban public housing projects. In After the Projects, Lawrence Vale investigates the deeply-rooted spatial politics of public housing development and redevelopment at a time when lower-income Americans face a desperate struggle to find affordable rental housing in many cities. Drawing on more than 200 interviews with public housing residents, real estate developers, and community leaders, Vale analyzes the different ways in which four major American cities implemented the federal government's HOPE VI program for public housing transformation, while also providing a national picture of this program. Some cities attempted to minimize the presence of the poorest residents in their new mixed-income communities, but other cities tried to serve as many low-income households as possible. Through examining the social, political, and economic forces that underlie housing displacement, Vale develops the novel concept of governance constellations. He shows how the stars align differently in each city, depending on community pressures that have evolved in response to each city's past struggles with urban renewal. This allows disparate key players to gain prominence when implementing HOPE VI redevelopment. A much-needed comparative approach to the existing research on public housing, After the Projects shines a light on the broad variety of attitudes towards public housing redevelopment in American cities and identifies ways to achieve more equitable processes and outcomes for low-income Americans.