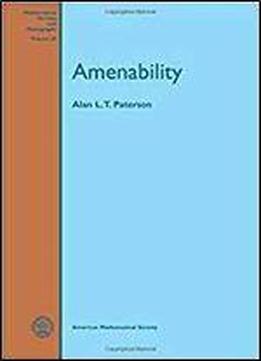 The subject of amenability has its roots in the work of Lebesgue at the turn of the century. In the 1940s, the subject began to shift from finitely additive measures to means. This shift is of fundamental importance, for it makes the substantial resources of functional analysis and abstract harmonic analysis available to the study of amenability. The ubiquity of amenability ideas and the depth of the mathematics involved points to the fundamental importance of the subject. This book presents a comprehensive and coherent account of amenability as it has been developed in the large and varied literature during this century. The book has a broad appeal, for it presents an account of the subject based on harmonic and functional analysis. In addition, the analytic techniques should be of considerable interest to analysts in all areas. In addition, the book contains applications of amenability to a number of areas: combinatorial group theory, semigroup theory, statistics, differential geometry, Lie groups, ergodic theory, cohomology, and operator algebras. The main objectives of the book are to provide an introduction to the subject as a whole and to go into many of its topics in some depth. The book begins with an informal, nontechnical account of amenability from its origins in the work of Lebesgue. The initial chapters establish the basic theory of amenability and provide a detailed treatment of invariant, finitely additive measures (i.e., invariant means) on locally compact groups. The author then discusses amenability for Lie groups, ``almost invariant'' properties of certain subsets of an amenable group, amenability and ergodic theorems, polynomial growth, and invariant mean cardinalities. Also included are detailed discussions of the two most important achievements in amenability in the 1980s: the solutions to von Neumann's conjecture and the Banach-Ruziewicz Problem. The main prerequisites for this book are a sound understanding of undergraduate-level mathematics and a knowledge of abstract harmonic analysis and functional analysis. The book is suitable for use in graduate courses, and the lists of problems in each chapter may be useful as student exercises