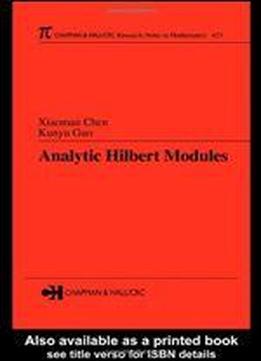 The seminal 1989 work of Douglas and Paulsen on the theory of Hilbert modules over function algebras precipitated a number of major research efforts. This in turn led to some intriguing and valuable results, particularly in the areas of operator theory and functional analysis. With the field now beginning to blossom, the time has come to collect those results in one volume. Written by two of the most active and often-cited researchers in the field, Analytic Hilbert Modules offers a clear, logical survey of recent developments, including advances made by authors and others. It provides much-needed insight into function theory of several variables and includes significant results published here for the first time in areas such as characteristic space theory, rigidity phenomena, the equivalence problem, Arveson modules, extension theory, and reproducing Hilbert spaces on n-dimensional complex space.