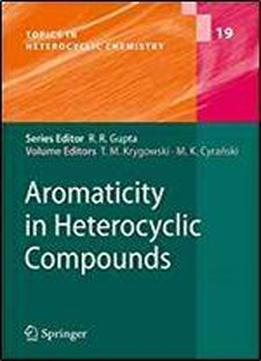 Aromaticity is a notion that appeared in the mid-nineteenth century to differentiate between unsaturated hydrocarbons and formally unsaturated benzene [1–3]. At the end of the nineteenth century it seemed that cyclicity was a necessary condition for differentiation between the two, but at the beginning of the twentieth century it turned out that the above assumption was not correct because cyclooctatetraene exhibited typical properties known for polyenes [4]. The essential property of b- zene-like compounds, often identified with aromatic compounds, was low react- ity. Hence thermodynamic stability was defined as resonance energy [5, 6] and was the first quantitative measure of aromaticity. Many theoretical approaches were proposed later to estimate this quantity, and now the criterion is often considered to be the most fundamental [7]. Almost at the same time, magnetic susceptibility was used to describe aromaticity [8, 9]. Consequently, many concepts based on mag- tism were developed, probably the most effective in assessment of aromaticity being nucleus independent chemical shift (NICS) [10] or Fowler’s maps of ring currents [11]. The criterion served Schleyer as a basis for a definition of aromat- ity: “Compounds which exhibit significantly exalted diamagnetic susceptibility are aromatic. Cyclic delocalisation may also result in bond length equalization, abn- mal chemical shifts and magnetic anisotropies, as well as chemical and physical properties which reflect energetic stabilisation”[12].