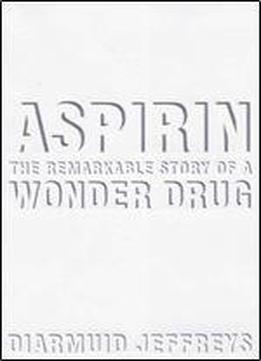 Aspirin: The Remarkable Story Of A Wonder Drug
by Diarmuid Jeffreys / 2004 / English / PDF

Americans take millions of aspirin each year, little dreaming that the seemingly ordinary pill is one of the most amazing creations in medical history. Aspirin is a drug so astonishingly versatile that it can relieve your headache, ease your aching limbs, lower your temperature, and treat some of the deadliest human diseases, preventing everything from heart attacks to cancer to strokes. And the history of the drug is just as surprising. Rich in dramatic twists and discoveries, the story of aspirin begins in ancient Egypt, and embraces wars, epidemics, espionage, an Oxfordshire vicar, a forgotten Jewish scientist, the Industrial Revolution, a common tree, the Treaty of Versailles, the world's most powerful pharmaceutical companies, Auschwitz, a mercurial advertising genius, and much more. Bringing alive a compelling cast of characters in a dazzling journey across centuries, the author reveals how chance and design brought the drug into being as we know it at the end of the nineteenth century, and how intrigue, greed, and ambition combined to make aspirin one of the most commercially successful products of all time.