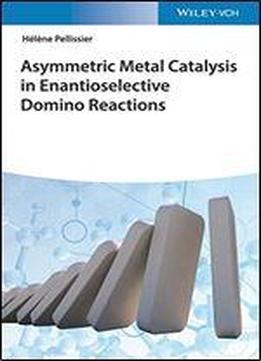 Introduces an innovative and outstanding tool for the easy synthesis of complex chiral structures in a single step Covering all of the literature since the beginning of 2006, this must-have book for chemists collects the major progress in the field of enantioselective one-, two-, and multicomponent domino reactions promoted by chiral metal catalysts. It clearly illustrates how enantioselective metal-catalyzed processes constitute outstanding tools for the development of a wide variety of fascinating one-pot asymmetric domino reactions, thereby allowing many complex products to be easily generated from simple materials in one step. The book also strictly follows the definition of domino reactions by Tietze as single-, two-, as well as multicomponent transformations. Asymmetric Metal Catalysis in Enantioselective Domino Reactions is divided into twelve chapters, dealing with enantioselective copper-, palladium-, rhodium-, scandium-, silver-, nickel-, gold-, magnesium-, cobalt-, zinc-, yttrium and ytterbium-, and other metal-catalyzed domino reactions. Most of the chapters are divided into two parts dealing successively with one- and two-component domino reactions, and three-component processes. Each part is subdivided according to the nature of domino reactions. Each chapter of the book includes selected applications of synthetic methodologies to prepare natural and biologically active products. -Presents the novel combination of asymmetric metal catalysis with the concept of fascinating domino reactions, which allows high molecular complexity with a remarkable level of enantioselectivity -Showcases an incredible tool synthesizing complex and diverse chiral structures in a single reaction step -Includes applications in total synthesis of natural products and biologically active compounds -Written by a renowned international specialist in the field -Stimulates the design of novel asymmetric domino reactions and their use in the synthesis of natural products, pharmaceuticals, agrochemicals, and materials Asymmetric Metal Catalysis in Enantioselective Domino Reactions will be of high interest to synthetic, organic, medicinal, and catalytic chemists in academia and R&D departments.