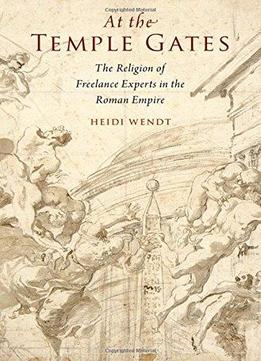 At The Temple Gates: The Religion Of Freelance Experts In The Roman Empire
by Heidi Wendt / 2016 / English / PDF

In his sixth satire, Juvenal speculates about how Roman wives busy themselves while their husbands are away, namely, by entertaining a revolving door of exotic visitors who include a eunuch of the eastern goddess Bellona, an impersonator of Egyptian Anubis, a Judean priestess, and Chaldean astrologers. From these self-proclaimed religious specialists women solicit services ranging from dream interpretation to the coercion of lovers. Juvenal's catalogue suggests the popularity of such "freelance" experts at the turn of the second century and their familiarity to his audience, whom he could expect to get the joke.

Heidi Wendt investigates the backdrop of this enthusiasm for the religion of freelance experts by examining their rise during the first two centuries of the Roman Empire. Unlike civic priests and temple personnel, freelance experts had to generate their own authority and legitimacy, often through demonstrations of skill and learning in the streets, in marketplaces, and at the temple gates, among other locations in the Roman world. Wendt argues that these professionals participated in a highly competitive form of religious activity that intersected with multiple areas of specialty, particularly philosophy and medicine. Over the course of the imperial period freelance experts grew increasingly influential, more diverse with respect to their skills and methods, and more assorted in the ethnic coding of their practices. Wendt argues that this context engendered many of the innovative forms of religion that flourished in the second and third centuries, including phenomena linked with Persian Mithras, the Egyptian gods, and the Judean Christ.

The evidence for freelance experts in religion is abundant, but scholars of ancient Mediterranean religion have only recently begun to appreciate their impact on the empire's changing religious landscape. At the Temple Gates integrates studies of Judaism, Christianity, mystery cults, astrology, magic, and philosophy to paint a colorful portrait of religious expertise in early Rome.