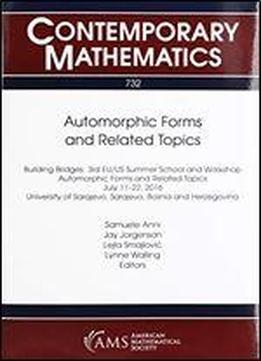 This volume contains the proceedings of the Building Bridges: 3rd EU/US Summer School and Workshop on Automorphic Forms and Related Topics, which was held in Sarajevo from July 1122, 2016. The articles summarize material which was presented during the lectures and speed talks during the workshop. These articles address various aspects of the theory of automorphic forms and its relations with the theory of L-functions, the theory of elliptic curves, and representation theory. In addition to mathematical content, the workshop held a panel discussion on diversity and inclusion, which was chaired by a social scientist who has contributed to this volume as well. This volume is intended for researchers interested in expanding their own areas of focus, thus allowing them to build bridges to mathematical questions in other fields.