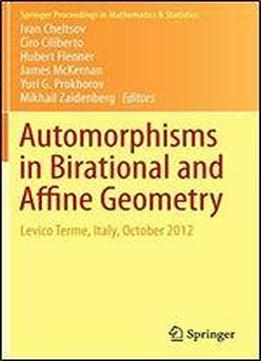 The main focus of this volume is on the problem of describing the automorphism groups of affine and projective varieties, a classical subject in algebraic geometry where, in both cases, the automorphism group is often infinite dimensional. The collection covers a wide range of topics and is intended for researchers in the fields of classical algebraic geometry and birational geometry (Cremona groups) as well as affine geometry with an emphasis on algebraic group actions and automorphism groups. It presents original research and surveys and provides a valuable overview of the current state of the art in these topics. Bringing together specialists from projective, birational algebraic geometry and affine and complex algebraic geometry, including Mori theory and algebraic group actions, this book is the result of ensuing talks and discussions from the conference Groups of Automorphisms in Birational and Affine Geometry held in October 2012, at the CIRM, Levico Terme, Italy. The talks at the conference highlighted the close connections between the above-mentioned areas and promoted the exchange of knowledge and methods from adjacent fields.