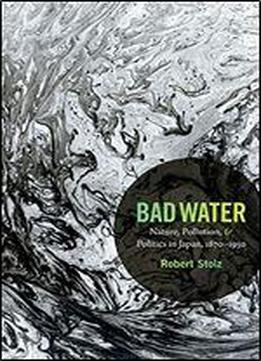 Bad Water is a sophisticated theoretical analysis of Japanese thinkers and activists' efforts to reintegrate the natural environment into Japan's social and political thought in the late nineteenth century and early twentieth. The need to incorporate nature into politics was revealed by a series of large-scale industrial disasters in the 1890s. The Ashio Copper Mine unleashed massive amounts of copper, arsenic, mercury, and other pollutants into surrounding watersheds. Robert Stolz argues that by forcefully demonstrating the mutual penetration of humans and nature, industrial pollution biologically and politically compromised the autonomous liberal subject underlying the political philosophy of the modernizing Meiji state. In the following decades, socialism, anarchism, fascism, and Confucian benevolence and moral economy were marshaled in the search for new theories of a modern political subject and a social organization adequate to the environmental crisis. With detailed considerations of several key environmental activists, including Tanaka Shz, Bad Water is a nuanced account of Japan's environmental turn, a historical moment when, for the first time, Japanese thinkers and activists experienced nature as alienated from themselves and were forced to rebuild the connections.