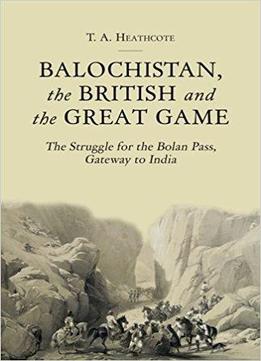 Balochistan, The British And The Great Game: The Struggle For The Bolan Pass, Gateway To India
by T. A. Heathcote / 2016 / English / PDF

The Great Game for Central Asia led to British involvement in Balochistan, a sparsely-populated area in Pakistan, mostly desert and mountain, and containing the Bolan Pass, the southern counterpart of the more famous Khyber. It occupies a position of great strategic importance between Pakistan, Afghanistan, Iran and the Arabian Sea. Heathcote's book is a history of the Khanate of Kalat and of British operations against the Baloch hill tribes who raided frontier settlements and the Bolan caravans. Its themes include rivalry between British officials in Sind and the Punjab, high profile disputes between British politicians over frontier policy and organisation, and the British occupation of Quetta, guardian city of the Bolan, in the run-up to the Second Afghan War. Among the many strong characters in this story is Sir Robert Sandeman, hitherto hailed as the peaceful conqueror of Balochistan , now revealed as a ruthless careerist, whose personal ambitions led to the fragmentation of the country under British domination. The closing chapter summarises subsequent events up to modern times, in which the Baloch have maintained a long-running struggle for greater autonomy within Pakistan.