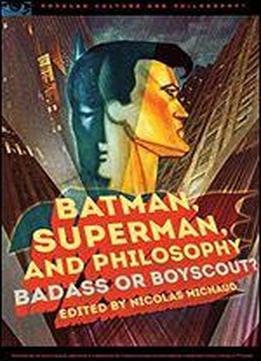 Batman or Superman? Which of these heroic figures is morally superior? Which is more dramatically effective? Which is more democratic? Which shows us the better way to fight crime? InBatman, Superman, and Philosophy, 26 philosophers evaluate Superman vs. Batman in order to decide which of them "wins" by various criteria. Since both Batman, the megalomaniacal industrialist, and Superman, the darling of the media, sometimes operate outside the law, which of them makes the better vigilante and how do they compare with Robin Hood, the anonymous donor, the Ninja, and the KKK? Which of them comes out better in terms of evolutionary biology? Which of the heroes works more effectively to resist oppression? Which one is better for the environment? Which of these two makes a better model and inspiring myth to define our culture and society? Is Batman or Superman the more admirable person? Who conforms more closely to Nietzsche'sbermensch? Who makes the better god? Who is more self-sacrificing? Whose explicit code of morality is superior? Which superhero gives us more satisfying dramatic conflict? And why does a battle between the two make such a compelling drama?