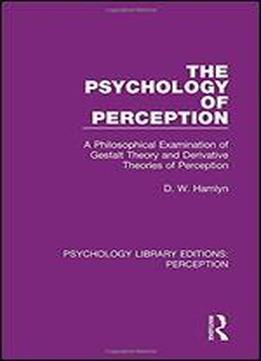 The Psychology Of Perception: A Philosophical Examination Of Gestalt Theory And Derivative Theories Of Perception
by D. W. Hamlyn / 2017 / English / PDF

Originally published in 1957, the primary aim of this study was to shed light upon the logical character of the psychology of perception. D.W. Hamlyn begins by delimiting the field of psychological inquiry into perception, then gives a detailed account of the types of explanation appropriate in the field. He maintains that these explanations have certain important peculiarities which distinguish them from other scientific inquiries. In view of the central importance of Gestalt Theory in this field an account is given of its origins, and its main features are critically discussed. The work should still be of considerable interest to both philosophers and psychologists, as well as to all those interested in the relations between the two subjects.