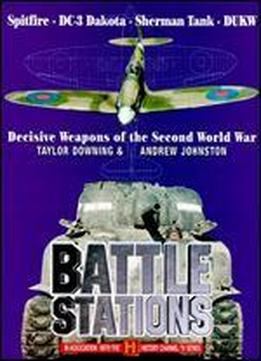 The Second World War, fought so bitterly on land, sea and in the air, produced a number of exceptional weapons which have become legendary. Battle Stations examines four of these superb fighting machines the Spitfire, the C-47 (DC-3 Dakota), the Sherman Tank and the amphibious DUKW. The story of each is told from the design stage, throughout production to their war-winning use in a particular theatre and phase of WW2. Those stories are as much about the men and women responsible for creating and using each weapon as the equipment themselves. By demonstrating the technical achievements, scale of production and the courage and ingenuity of the soldiers, sailors and airmen who fought with these weapons, their dramatic achievements are brought vividly to life.