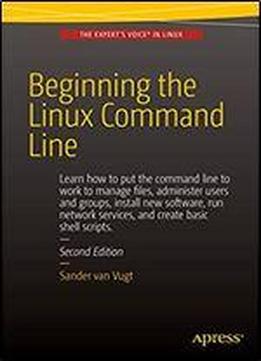 This is Linux for those of us who don’t mind typing. All Linux users and administrators tend to like the flexibility and speed of Linux administration from the command line in byte–sized chunks, instead of fairly standard graphical user interfaces. Beginning the Linux Command Line is verified against all of the most important Linux distributions, and follows a task–oriented approach which is distribution agnostic. Now this Second Edition of Beginning the Linux Command Line updates to the very latest versions of the Linux Operating System, including the new Btrfs file system and its management, and systemd boot procedure and firewall management with firewalld! Updated to the latest versions of Linux Work with files and directories, including Btrfs! Administer users and security, and deploy firewalld Understand how Linux is organized, to think Linux!