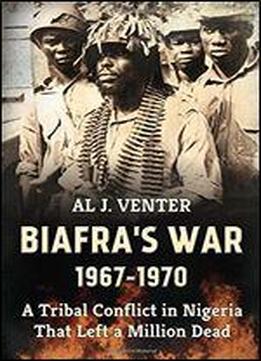 Almost half a century has passed since the Nigerian Civil War ended. But memories die hard, because a million or more people perished in that internecine struggle, the majority women and children, who were starved to death. Biafra's war was modern Africa's first extended conflict. It lasted almost three years and was based largely on ethnic, by inference, tribal grounds. It involved, on the one side, a largely Christian or animist southeastern quadrant of Nigeria which called itself Biafra, pitted militarily against the country's more populous and preponderant Islamic north. These divisions - almost always brutal - persist. Not a week goes by without reports coming in of Christian communities or individuals persecuted by Islamic zealots. It was also a conflict that saw significant Cold War involvement: the Soviets (and Britain) siding and supplying Federal Nigeria with weapons, aircraft and expertise and several Western states - Portugal, South Africa and France especially - providing clandestine help to the rebel state. For that reason alone, this book is an important contribution towards understanding Nigeria's ethnic divisions, which are no better today than they were then. Biafra was the first of a series of religious wars that threaten to engulf much of Africa. Similar conflicts have recently taken place in the Ivory Coast, Kenya, Southern Sudan, the Central African Republic, Senegal (Cassamance), both Congo Republics and elsewhere. As the war progressed, Biafra also attracted mercenary involvement, many of whom arriving from the Congo which had already seen much turmoil. Western pilots were hired by Lagos and they flew the first Soviet MiG-17 jet fighters to have played an active role in a 'Western' war. Al Venter spent time covering this struggle. He left the rebel enclave in December 1969, only weeks before it ended and claims the distinction of being the only foreign correspondent to have been rocketed by both sides: first by Biafra's tiny Swedish-built Minicon fighter planes while he was on a ship lying at anchor in Warri harbour and thereafter, by MiG jets flown by mercenaries. Among his colleagues inside the beleaguered territory were the celebrated Italian photographer Romano Cagnoni as well as Frederick Forsyth who originally reported for the BBC and then resigned because of the partisan, pro-Nigerian stance taken by Whitehall. He briefly shared quarters with French photographer Giles Caron who was later killed in Cambodia. Prior to that Venter had been working for John Holt in Lagos. It is interesting that his office at the time was at Ikeja International Airport (Murtala Muhammed today) where the second Nigerian army mutiny was plotted and from where it was launched. From this perspective he had a proverbial 'ringside seat' of the tribal divisions that followed as hostilities escalated. Venter took numerous photos while on this West African assignment, both in Nigeria while he was based there and later in Biafra itself. Others come from various sources, including some from the same mercenary pilots who originally targeted him from the air.