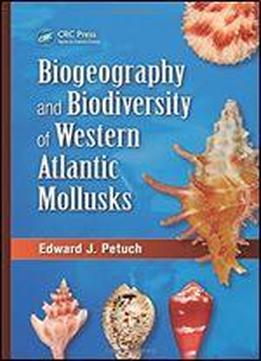 Shallow water marine molluscan faunas are distributed in a pattern of distinct, geographically definable areas. This makes mollusks ideal for studying the distribution of organisms in the marine environment and the processes and patterns that control their evolution. Biogeography and Biodiversity of Western Atlantic Mollusks is the first book to use quantitative methodologies to define marine molluscan biogeographical patterns. It traces the historical development of these patterns for the subtropical and tropical western Atlantic. The book discusses the multistage process of evolving new taxa caused by eustatic fluctuations, ecological stress, and evolutionary selection. Drawing on his decades of intensive field work, the author defines three western Atlantic molluscan provinces and 15 subprovinces based on his Provincial Combined Index, a modern refinement of Valentines 50% rule. The faunal provincesCarolinian, Caribbean, and Brazilianare discussed in detail. The text defines the physical aspects of the provinces using quantitative data, with water temperature as the primary parameter. It discusses the details of the 15 subprovincesgeographically definable faunal subdivisionsas well as provinciatones, transition zones of provincial overlap. The authors algorithms demonstrate that the bulk of the molluscan biodiversity is concentrated in 40 separate centers of speciation, ranging from Cape Hatteras, North Carolina, south to Argentina. Many of these evolutionary hotspots reside on remote archipelagos and offshore banks as well as within areas of provincial overlap. The text describes some of the more exotic and poorly known areas and presents maps and color photographs of characteristic habitats, index species, and live animals, including over 400 species of rare and seldom seen shells.