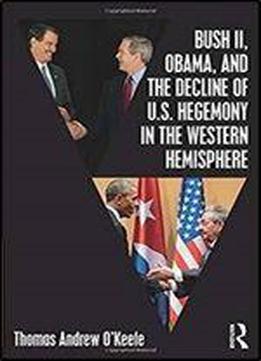 Bush Ii, Obama, And The Decline Of U.s. Hegemony In The Western Hemisphere
by Thomas Andrew O'Keefe / 2018 / English / PDF

Bush II, Obama, and the Decline of U.S. Hegemony in the Western Hemisphere applies competing definitions and conceptions of hegemony to various foreign policy initiatives and events during the administrations of George W. Bush and Barack H. Obama to test whether they manifest a decline in traditional United States dominance and leadership in the Western Hemisphere. In particular, the book examines the continued relevancy of the Inter-American system, the failure to establish a Free Trade Area of the Americas (FTAA), and the stillborn Energy and Climate Partnership of the Americas (ECPA). It also discusses the implications of the People's Republic of China becoming a major trading partner and important source of financing and investment capital throughout Latin America and the Caribbean. The book provides critical reviews of Plan Colombia, the Merida Initiative, Pathways to Prosperity in the Americas, the Central American Regional Security Initiative (CARSI), the Caribbean Basin Security Initiative (CBSI), 100,000 Strong in the Americas, and the restoration of normal U.S. diplomatic relations with Cuba.