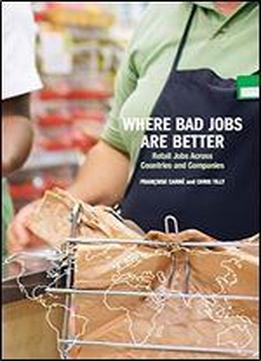 Where Bad Jobs Are Better: Retail Jobs Across Countries And Companies
by Francoise Carre / 2017 / English / PDF

Retail is now the largest employer in the United States. For the most part, retail jobs are bad jobs characterized by low wages, unpredictable work schedules, and few opportunities for advancement. However, labor experts Franoise Carr and Chris Tilly show that these conditions are not inevitable. In Where Bad Jobs Are Better, they investigate retail work across different industries and seven countries to demonstrate that better retail jobs are not just possible, but already exist. By carefully analyzing the factors that lead to more desirable retail jobs, Where Bad Jobs Are Better charts a path to improving job quality for all low-wage jobs. In surveying retail work across the United States, Carr and Tilly find that the majority of retail workers receive low pay and nearly half work part-time, which contributes to high turnover and low productivity. Jobs staffed predominantly by women, such as grocery store cashiers, pay even less than retail jobs in male-dominated fields, such as consumer electronics. Yet, when comparing these jobs to similar positions in Western Europe, Carr and Tilly find surprising differences. In France, though supermarket cashiers perform essentially the same work as cashiers in the United States, they receive higher pay, are mostly full-time, and experience lower turnover and higher productivity. And unlike the United States, where many retail employees are subject to unpredictable schedules, in Germany, retailers are required by law to provide their employees notice of work schedules six months in advance. The authors show that disparities in job quality are largely the result of differing social norms and national institutions. For instance, weak labor regulations and the decline of unions in the United States have enabled retailers to cut labor costs aggressively in ways that depress wages and discourage full-time work. On the other hand, higher minimum wages, greater government regulation of work schedules, and stronger collective bargaining through unions and works councils have improved the quality of retail jobs in Europe. As retail and service work continue to expand, American employers and policymakers will have to decide the extent to which these jobs will be good or bad. Where Bad Jobs Are Better shows how stronger rules and regulations can improve the lives of retail workers and boost the quality of low-wage jobs across the board.